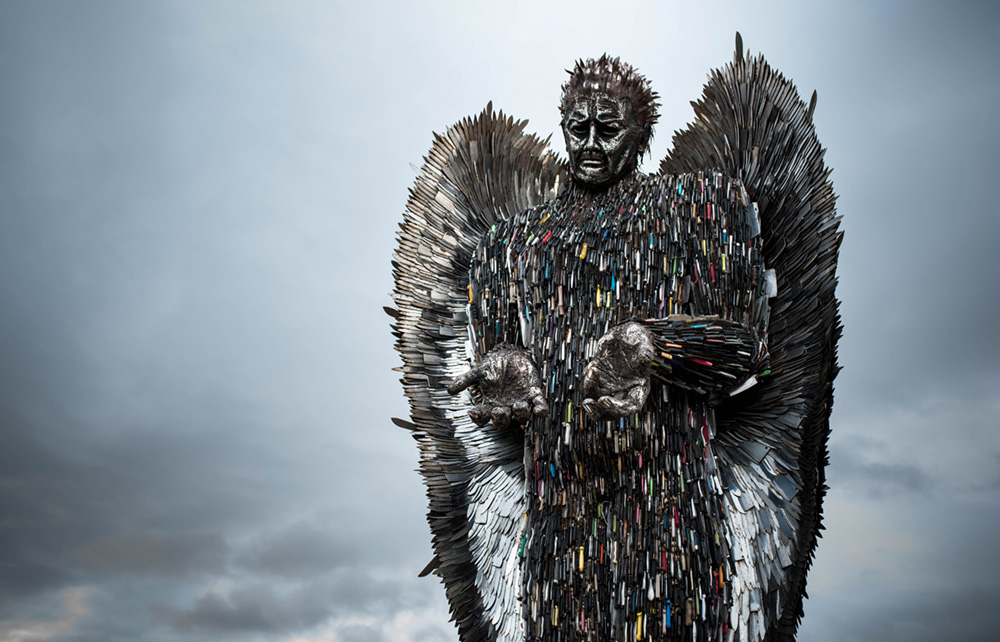 Derby has been chosen to be one of the city’s across the country to host the National Monument Against Violence and Aggression.  Known as the ‘Knife Angel’, the 27ft sculpture, made from up to 100,000 bladed weapons collected in knife banks across the country, is free to visit and based next to the Cathedral on Irongate, for 28 days in October later this year.

Created in collaboration with all 43 police forces, the Home Office, Anti-violence groups and hundreds of families who have been affected by knife crime, the monument is a symbol of the nation’s intolerance to violence and aggression.  It was created by the British Ironwork Centre, by sculptor Alfie Bradley to highlight the impact knife crime has on people, families and communities.  Relatives of those killed by knife crime were invited to engrave the blades with names and messages for their loved ones as part of the sculpture.

During the time that the Knife angel is in Derby there will be an educational package, within that is a Youth Summit.  This event is free of charge.   The purpose of the summit is to educate young people who are at risk to knife crime but also to those that are willing to speak out and stand up against knife crime.

Led By Lanterns are a four piece rock band from Birmingham, who have created a song in support of our campaign. Boots, Chris, Shaun & Brad have created the single inspired by our national campaign, Save a Life, Surrender your Knife, to raise awareness of the effects of knife crime and violence.  The song is incredibly moving and features Rachel Webb who is a huge supporter of the work we are doing. She sadly lost her son to a horrific knife attack in Derby city centre last year. The band have worked with her to create their music video. When the band started researching the UK’s knife crime statistics, they were shocked at how much of a problem it really is. Every 4 minutes there is a knife attack in the UK. That means every 4 minutes someone’s life is changed, their families lives change.

The band met with Alfie Bradley and visited the workshop here in Oswestry to see the creation of the National Monument Against Violence and Aggression and they couldn’t believe the amount of weapons that had been handed in.  We thank the band for their tremendous support and it adds a new dimension to the National campaign, a new direction to spread the awareness of the effects on victims and their families, as the effects hit them the most.